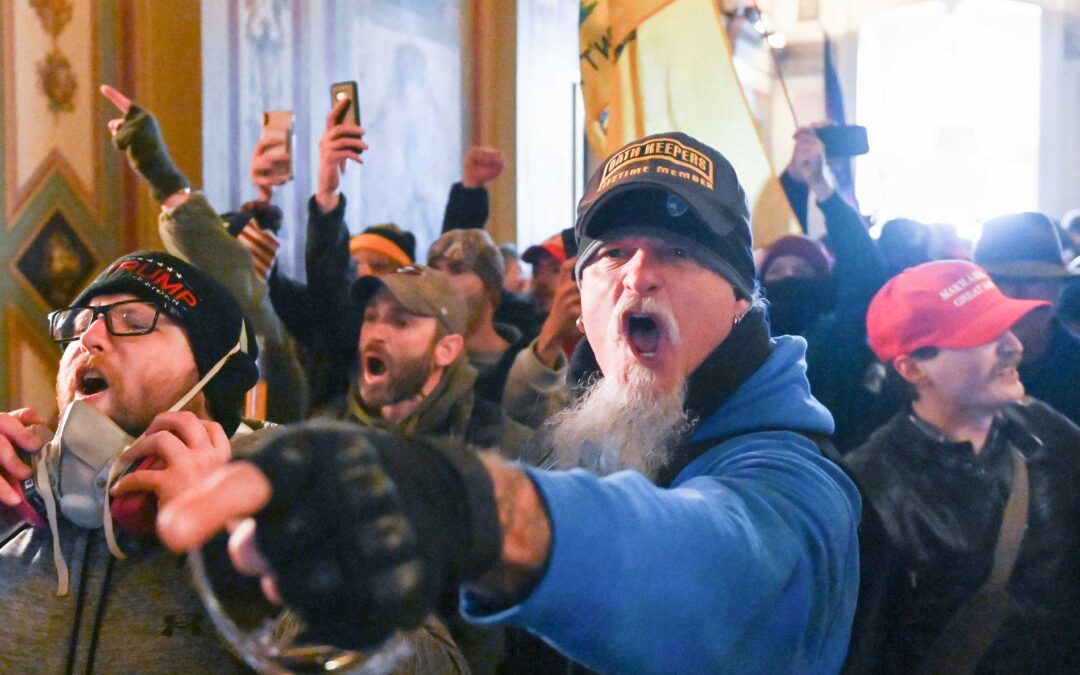 “They want to make a statement that this will not be tolerated, so if they can make a plausible arrest, they will,” Eliadis said. “The ones who wanted the attention, they’re going to get the attention. It’s easier to focus on them than the masses coming through.”

With a growing number of arrests and charges related to last week’s storming of the U.S. Capitol, multiple law enforcement agencies are building a sprawling investigation into who participated in the violence that claimed at least five lives and sent fearful lawmakers into hiding.

Nearly 100 people have been arrested for their roles in the attack carried out by thousands of President Donald Trump’s supporters or in unrest surrounding the Capitol that day. Many face lesser charges such as unlawful entry, disorderly conduct and defacing public property. Only a few have been accused of more serious crimes, such as felony violations of the Riot Act.

In the cases of those who attacked the Capitol, those initial charges could be a precursor of more serious allegations, said University of Texas law professor Bobby Chesney.

Prosecutors have primarily focused on those caught on camera and identified by tipsters in photos and videos.

It’s common for authorities to make arrests based on readily proven charges, such as trespassing on federal property, Chesney said. Then, weeks later, prosecutors seek grand jury indictments on more serious charges. A supporter of President Trump is arrested inside the US Capitol after rioters rushed the building on Jan. 6.

“It remains to be seen how aggressive the Justice Department will be in terms of going after organizers and ringleaders,” Chesney said. “No doubt the FBI and DOJ would prefer to get past January 20, moreover, both for the sake of general calm and to avoid any prospect of a pardon shutting down a particular case.”

Heading up the task of identifying, locating, arresting and charging offenders falls on the shoulders of Michael Sherwin, acting U.S. attorney for the District of Columbia. He told National Public Radio this week that “hundreds” could ultimately face charges.

No charges are off the table, Sherwin said. Seditious conspiracy, rioting and insurrection will be considered if warranted.

“Prosecutors have a tremendous amount of discretion, and this was an unprecedented assault on our seat of government,” said University of Wisconsin Law Professor Keith Findley. “My guess is they’ll take that very seriously. … They’ll have many, many options to charge independently, or stack offenses. There’s a lot on the table.”

But some, like Anne Milgram, a New York University law professor and former attorney general of New Jersey, criticized the lack of more serious charges for those accused of ransacking the Capitol.

“What we’ve yet to see is a connection to seditious conspiracy,” Milgram said. “It feels to me, and everyone who watched, that the goal of this mob was to stop Congress from certifying the vote. … The charges right now do not match the harm.”

Milgram said she expects the heaviest charges to stem from the death of Capitol Police officer Brian Sicknick. Others have suggested several members of the mob could face felony murder charges in that case similar to a getaway driver in a fatal robbery.

Federal investigators also have the option of serving subpoenas on technology companies to preserve content that perpetrators might try to delete.

Pete Eliadis, president and CEO of Intelligence Consulting Partners, a security firm, faulted Capitol Police for failing to secure the building and make arrests on the scene, which will make the job harder for investigators.

But he believes the government will try to make an example out of the key figures whose viral images show their role in inciting violence.

“They want to make a statement that this will not be tolerated, so if they can make a plausible arrest, they will,” Eliadis said. “The ones who wanted the attention, they’re going to get the attention. It’s easier to focus on them than the masses coming through.”

Labeling the riot and finding the most accurate charges could be difficult without a domestic terrorism law, which Congress has considered for years, said Chris Bonner, a retired FBI agent who teaches courses on homeland security at Embry-Riddle Aeronautical University in Daytona Beach, Florida.

“The very first thing people want to do is call something terrorism. There is no federal law covering domestic terrorism,” Bonner said. “If we’re going to decry something and criminalize it, we better have a law to cover it and then it better be equally applied across the ideological spectrum from extreme left to extreme right.”